Our coaching team includes Neb, Efe, Maxim, Navid, Dave, Dominik and Leila. We run sessions across all venues of Cambourne, Northstowe and St Neots for Under 10, Under 12, Under 14, Under 16, Under 18 and adult age groups. 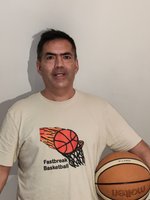 Now the director of 'Fastbreak Basketball', he is very passionate about the grassroots basketball and his vision is that everyone should have the opportunity to play this complete and beautiful game in Cambridgeshire. 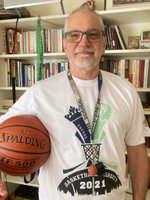 Neb is a Basketball England Level 2 coach. He is offering his wealth of basketball experience to our young people in Cambridgeshire for free. In return, he expects commitment from both parents and players alike. You can only get coached by him if you commit to Mondays, Wednesdays and Saturdays training sessions (i.e. 4 hours per week minimum) in addition to the occasional matches on Sundays.

We invite all talented players across the county to join his team if they would like to fulfil their full basketball potentials.

Here is what Neb has said about his basketball biography:

I started to play basketball many years ago, in 1970 when my country, Yugoslavia won its first world championship. I was ten at the time and went out in the street to play. Everyone did. Very soon I joined BASK, one of the oldest sport clubs in Belgrade. I went through their junior programmes (12-18 yrs of age) and then continued to play for their first team (1978-1991). At the peak of our success, we played the second, professional (we could say today) Yugoslav division. Those were the 80s and the first Yugoslav division was by far the best league in the world outside the American NBA. From 1985 to 1992 Yugoslav clubs won all of the European championships but one. And all of that without American or any other imports or players older than 27 years. In this socialist country local players were not allowed to go and play abroad before age 27. And no one needed imports because they produced very good local players. So, the second division was pretty good.

In 1989 I was on a Yugoslav selection team that toured New Zealand. We went there without any training but did manage to beat, among others, the local national team in Wellington.

In 1991 I moved to New Zealand for good. I played two seasons for the Nelson Suns and started coaching. I then moved to Auckland in 1994 and set up a team with  a bunch of ex-Yu players from all parts of the war torn country. We played the local social league against all professional players in the area, including American imports, and were quite successful.

I was an academic in Auckland and received an offer to come to Cambridge. I accepted the offer and since 2001 I am Associate Professor and the Director of the University of Cambridge Language Programmes.

I have three sons. The two big ones play rugby and Marko (14) decided two years ago to give up rugby (played since age 5) and switch to basketball. That’s how Marko joined the Raptors and how I got interested in the club. I worked with the U14 team last year, enjoyed it and thought that with my experience, knowledge and passion for the game I could contribute to their personal and the development of their team and club.

Looking forward to seeing you all and to some great basket-balling times in and around Cambourne, 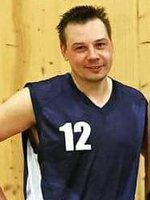 Maxim will be running our U12 sessions in Cambourne as well under 10 age group in Northstowe. In addition to having played the game for several years, he has been a qualified Level 2 coach from Basketball England for several years. His main reason to get involved with our coaching programme is to be part of the basketball journey of his 8 year old son.

Here is what Maxim has said about his basketball biography:

My basketball biography started more than 25 years ago when I first discovered this incredible game back in Russia. As a 12 years old boy I enjoyed playing with big guys at local playgrounds. In 1996 the first thing I did after immigration to Israel was making friends with local teens who played basketball in our local playground. We played days and nights.

Until starting my military service I played several years for the Bnei-Brit Yaffo teenage team in Basketball league.

After finishing my military service I played for Elizur Beer-Sheva for a couple of years in and then joined Ben Gurion University Basketball Club and had a great time there for 2 years.

Relocation to the UK didn't stop my passion for the ball game and in 2015 I joined Cambridge Cougars Basketball Club and stayed with them for 3 years. After that I moved to Raptors Cambourne and played there for another year.

Now I feel it's the right time to share my love, knowledge, passion, skills and experience with young fellows. Especially after my 8 years old son started to join me, expressed an interest to play basketball and asked me to be his coach. 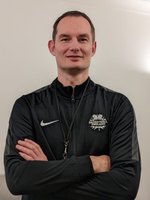 Dr Dominik Szymanski - Referee and U12 (Cambourne and Northstowe)

Dominik is a basketball enthusiast and physical activity advocate who truly believes in the opportunities and learning that sport has the potential to provide. Dominik is very passionate about coaching and working with players to achieve their goals and push themselves beyond their limits. Dominik helps running U12 sessions in Cambourne and Northstowe as well he officiates games in Fastbreak basketball league. Dominik is currently working towards Level 2 referring qualification.

Here is what Dominik has said about his basketball biography:

I love to watch and play the game, basketball is a very entertaining sport and can be played by anyone. Some of the most vivid memories I have from my childhood were soundtracked by a song called “Sirius” by the Alan Parsons Project rock band. “Sirius” is the intro tune for the Chicago Bulls basketball team. I was lucky to be of an age where I witnessed the Bulls play in 90’s. This is when I started playing basketball. I played for my school teams through my secondary and high school years. I still enjoy playing a ball and make new friends on the court. During the free time I coach my son basketball and spend time with my family. 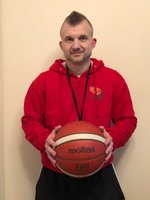 David Cook - U14 (Cambourne and Northstowe) and Referee

Dave's enthusiastic about basketball is second to none. He was one of the key people to help starting Cambourne Raptors basketball club in 2016. Since then, he has played for several clubs including Cambourne Raptors, Huntingdon Hawks and East Cambs Warriors. He has brought his experience of being part of many clubs to Fastbreak Basketball set up. He holds the Basketball England Level 2 coaching qualification and currently is aiming to get Level 2 refereeing qualification too.

Here is what Dave has said about his basketball biography:

I grew up in Cambridge and I’ve always been passionate about the game of basketball ever since I was a child.

I grew up in the era with watching Michael Jordan with the Chicago Bulls and all the NBA teams during the 90’s I used to just shoot hoops in the back garden and go to outdoor courts where possible in Cambridge nothing of any level just enjoyment.

The fact that I never knew about any basketball training as not the amount that is available now means I left the game behind.

In 2016 I re discovered my true passion for the game as I saw an advert for senior players in Cambourne I went along with no experience and no fundamentals just to see how I felt in an actual game situation. I loved every minute of it learning each session from a whole variation of players and experience learning more fundamentals and understanding basics of basketball skills.

I went on to play games in the Cambridgeshire league and Nene Valley league learning against some tough teams but this just made me more wise and determined to be the best player I can be.

I started off over weight and this effected my ability to perform as best as I could so I looked in to nutrition and exercises to help me reach my peak calories performance and be able to run as fast as I possibly wanted to.

I still like to play the game of basketball and will compete in teams as I believe this keeps my close to the game and on my highest level to be able to teach these skills I’ve learned to youth and others helping this at a younger age which I didn’t have the opportunity to have.

I would like to be able to help these young athletes achieve there goals and enjoy it on the way. 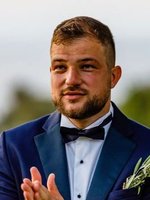 Efe lives in Northstowe and is offering his time for free so that he can transfer his wealth of basketball experience to our young people in Northstowe. Efe will be helping to run both U18 and senior sessions every Thursdays in 2021/22 season.

Here is what Efe has said about his basketball biography:

I started playing basketball when I was 8 years old back in 1998 at a local youth club. I continued playing for my school throughout my secondary and high school where we won the domestic league and came 3rd in the national league. Whilst in the high school I then joined a local team who was competing in the senior league in Northern Cyprus. I continued playing in the local team semi-professionally until I went to university which was the point I got transferred to the university team and played both in the university league and the professional basketball league. We won the university league and finished 4th in the professional league. At the same year I was called up to the North Cyprus U-21 national team and played in a summer cup tournament. I then moved to UK to continue my university study and started playing for University of Bath. I played for two years before I had a herniated disc injury. I started coaching since I moved to Northstowe and enjoyed throughout my experience so far. It gives me an opportunity to give what I have learnt throughout the years and make better players in the Northstowe area and improve the quality and interest of basketball in the UK overall. 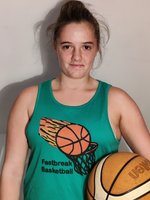 Leila is a Level 1 basketball coach and she is the youngest member of our coaching team. She is a sport enthusiast and plays various sports including Basketball, Tennis, Trampolining and personal fitness training. She has been a tennis and basketball assistant coach for several years coaching children 5 to 12 years old. She loves working on footwork and agility drills as well as teaching fundamentals such as good shooting technique, lay-ups, passing and dribbling.

Her favourite basketball player is Luka Dončić and she supports Dallas Mavericks.